The Inner Asian and Uralic National Resource Center at Indiana University recently welcomed Aynur to Bloomington, where she performed at the Lotus World Music and Arts Festival on September 28 and 29. Aynur’s performances showcased the emotional depth of the Kurdish folk music tradition as interpreted in an engaging contemporary style. Her performances in Bloomington are part of an active touring schedule that since the beginning of the year has included appearances across the United States as well as in Austria, Canada, France, Germany, Morocco, Norway, and Singapore. The Center’s sponsorship of Aynur’s performance is the latest example of the Center’s long-term cooperation with the Lotus Education and Arts Foundation to bring Inner Asian and Uralic cultural programming to south-central Indiana.

A Kurd from Turkey, Aynur is a vocal artist who specializes in infusing Kurdish folk music with a contemporary sensibility influenced by Western music. Her success in the music world has allowed her to become a prominent representative of Kurdish people in Turkey and throughout the world. The Lotus Education and Arts Foundation acknowledged Aynur’s efforts to unite people through music by selecting her as this year’s Kat Domingo Memorial Artist, an honor named for an advocate of the power of music to build bridges and community. In 2017, Aynur received the Master of Mediterranean Music Award in the category of “Mediterrannean Women in Action” from the Berklee Mediterranean Music Institute. This award recognized Aynur’s efforts to preserve and reinterpret Kurdish folk music, which has transformed her into an influential role model for other women artists on the Mediterranean music scene who are seeking to share their voices.

Aynur’s soulful style reflects the life and suffering of the Kurdish people, especially Kurdish women. She has explored the Kurdish folk tradition in five albums since 2004, including her most recent release entitled Hawniyaz (2016). In addition to earning accolades in the Turkish and international press, Aynur’s music has received the acclaim of fellow artists. Aynur has collaborated with numerous musicians, including Yo-Yo Ma and the Silk Road Ensemble, Kayhan Kalhor, Javier Limón, Kinan Azmeh, Mercan Dede, Salman Gambarov, Cemil Qocgiri, Morgenland All Star Band, Nerderland Blazers Ensemble, and Sertab Erener. Her engaging performance style was evident to the large crowd she attracted to the Buskirk-Chumley Theater during her two evening performances. Subdued, jazzy laments gradually yielded to ebullient celebratory refrains as audience members began to sing along, eventually rising from their seats to dance in the aisles. 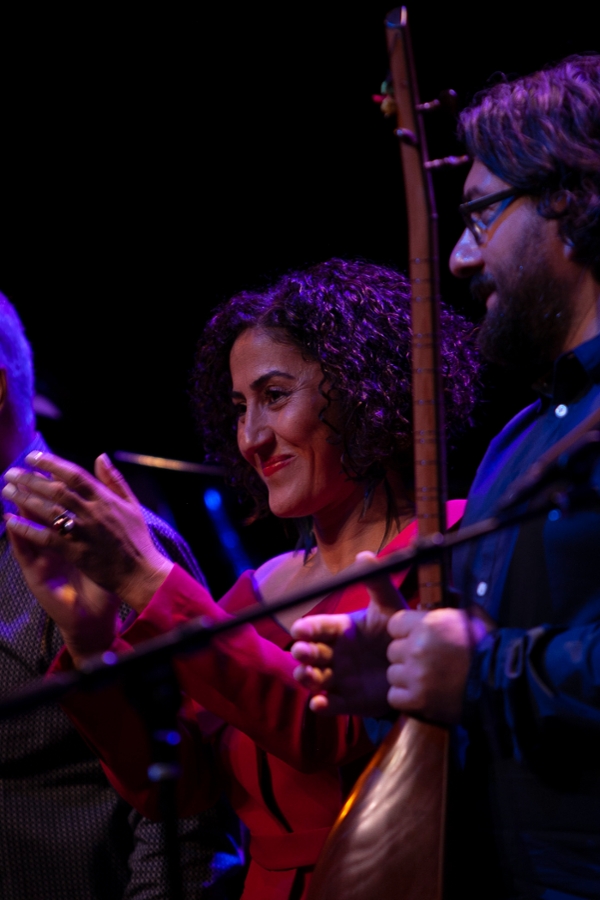 This year’s Lotus World Music and Arts Festival continues at least 19 years of the Center’s support for the Lotus Education and Arts Foundation. The Center typically sponsors at least one artist’s participation in the festival each year in addition to participating in the Lotus Blossoms program. Center-sponsored artists from recent years have included Anda Union (Mongolia), Söndörgő (Hungary), Şirin Pancaroğlu and the Simdi Ensemble (Turkey), and Tsuumi Sound System (Finland). Each of these artists have brought a distinctive example of Central Eurasian music to Bloomington and helped raise awareness of the region’s cultural landscape.

Named for local folk singer Lotus Dickey, the Lotus Education and Arts Foundation is a not-for-profit organization dedicated to creating opportunities to experience, celebrate, and explore the diversity of the world’s cultures, through music and the arts. The Center, along with other Title VI centers and other academic units at IU, regularly collaborate on a variety of outreach programs. The organization’s music festival attracts more than 12,000 people to Bloomington each year. In the last two decades, the Lotus Blossoms K-12 outreach program has created cultural encounters for more than 140,000 students.

Learn more about the Lotus Education and Arts Foundation.