There are very few people in America who learn or speak Azerbaijani. Those who study Azerbaijani can find careers in a variety of fields including business, consulting, translation and interpreting, Foreign Service and intelligence, journalism, and more.

Azerbaijani is a gateway to accessing Turkic languages spoken by millions of people in Iran, Iraq, Central Asia, and the Caucasus. These regions are of vital strategic importance in the world today. Azerbaijan is the largest and most populous country in the South Caucasus and possesses sizable reserves of oil resources. A conflict with neighboring Armenia continues to simmer, but pipelines through Georgia have given Azerbaijan a new window onto the world. Today, the United States is Azerbaijan’s most prominent trade partner, and these business partnerships are fueling demand for Americans who are fluent in Azerbaijani.

Modern Azerbaijani is a great resource for studying world-famous poets like Fuzuli, Nizami, and Khatai. It can also serve as a gateway to Ottoman Turkish, the language of diplomacy, administration, and literature in the Ottoman Empire. So you see, learning Azeri can open up rarely-explored research opportunities in history, culture, and languages of the Islamic world.

The South Caucasus has long been a crossroad, not just between the Iranian East and European West, but also between the Russian and steppe North and the Middle Eastern South. The Persian Empire was the first great empire to include Azerbaijan, followed by Greco-Roman, Arab, and Turkic periods in Azerbaijani history.

Azerbaijani belongs to the Turkic group of languages, which includes languages such as Turkish, Uzbek, Kazakh, Uyghur, and Tatar. Turkic languages have been spoken for many centuries across vast territory from the Balkans to China. Azerbaijani is mutually intelligible with Turkmen and Turkish. Azerbaijani’s distinctive characteristics are vowel harmony (vowels of the suffixes change to complement the vowels in the stem) and agglutinative grammar (suffixes with distinctive meaning are attached to the word stem one after another in a set order). Azerbaijani vocabulary contains loanwords from Arabic, Persian, and Russian.

Course offerings are made available in accordance with class level and student interest. Several IAUNRC languages - including Azerbaijani - are part of IU's Summer Language Workshop. 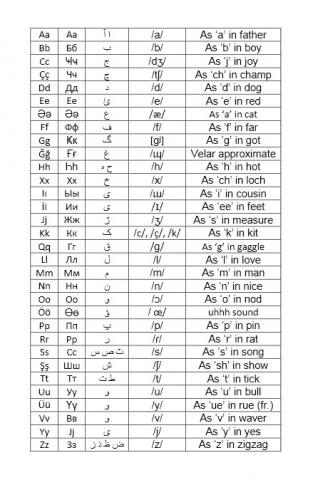 Azerbaijan is a land of music and culture. Their language is really cool!

Azerbaijanis have a very interesting cultural and national heritage.