Indiana University is the only university in the United States that regularly offers three levels of Uyghur language instruction: two semesters each of introductory, intermediate, and advanced. Additional levels are available based on demand. Small classes, individual attention, a friendly and fun atmosphere, interesting and high quality teaching materials, and scholarship opportunities for future study and research abroad will help you to learn this critical language. Instruction is offered through the Department of Central Eurasian Studies.

Uyghur is one of the languages available for the undergraduate major and minor in the Department of Central Eurasian Studies (CEUS).  Uyghur is also available as a component of graduate education in CEUS.

Students can fulfill their foreign language requirements or pursue their language interests in small classes taught by dedicated teachers who are able to provide individual attention. .

Course offerings are made available in accordance with class level and student interest. Uyghur language classes are offered at all levels during the academic year.

Uyghur language and culture is a gateway to the Turkic world, Central Asia, and the Islamic world. Knowledge of Uyghur can help you pursue a variety of employment options, including working in human rights organiztions and other non-profits, the government, the military, and even certain international companies. Many students learning Uyghur use the language to better understand an increasingly isolated region that frequently appears in the news media as the site of ethnic unrest and human rights violations, but the region is home to vibrant local cultures, rich history, generous endowments of natural resources. As such, the region is crucial to China and China's relations with Central Asia. Many older neighborhoods in the region thrum with a distinctly Central Asian beat, and mosques and minarets grace the skyline. Street vendors offer spices, nuts, and fruits, jeweled knives, richly embroidered caps, pomegranate juice, spiced lamb kebabs, and savory Central Asian pilaf.

Uyghur belongs to the Karluk branch of the Turkic language family, which also includes the Uzbek language. Uyghur grammar is logical and simpler than languages like Russian or Arabic, without any confusion caused by grammatical gender. Uyghur vocabulary is basically Turkic in origin, but there are strong influences from Arabic, Persian, Russian, and Chinese. Like many other Turkic languages, Uyghur displays vowel harmony and agglutination. Additionally, Uyghur shares the literary legacy of other Central Asian Turkic languages, including the substantial body of works in Chaghatay Turkic.

Uyghur has a long history of being recorded in written form. Many Uyghurs use a modified form of Perso-Arabic script to write the language, although other writing systems are used for auxiliary and historical purposes. Unlike most Arabic-derived scripts, the Uyghur Arabic alphabet has mandatory marking of all vowels. Latin and one Cyrillic alphabets also exist, though they are less commonly used. Uyghurs in Central Asia are more likely to use Cyrillic when writing. Online and phone-based text messages frequently employ Latin alphabets. 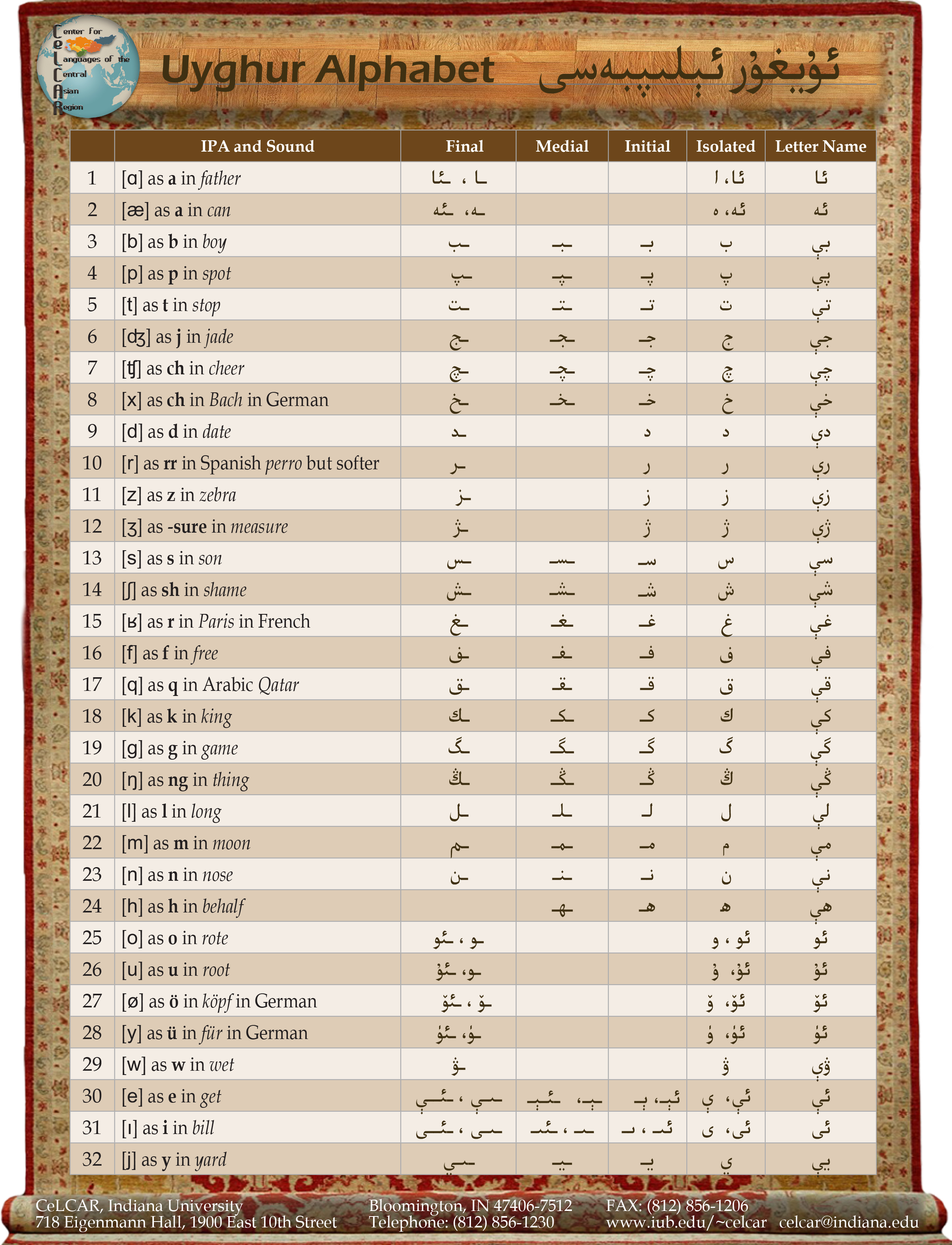 Hello, how are you?

How do you say it in Uyghur?