The Mongolian program in the Indiana University Department of Central Eurasian Studies (CEUS) is the only department in the United States that offers the opportunity to study three years of this extremely important historical and interesting region in Central Eurasia.

Mongolian is one of the languages available for the CEUS undergraduate major. Tracks with two or three years of language study are available.

Fulfill your foreign language requirement in a small class with dedicated teachers. You can also receive a CEUS minor with two years of Mongolian language study and a related culture course.

Course offerings are made available in accordance with class level and student interest. Several IAUNRC languages - including Mongolian - are part of IU's Summer Language Workshop.

The Mongol Empire (1206‒1368) was history’s largest land-based empire of all time. This empire and its successor states had enormous influence on subsequent world history. Traditional Mongol society provides many fascinating examples of social change under the influences of foreign conquered and conquering nations. Knowledge of Mongolian is essential to academic researchers in any field dealing with Mongolia, including history, anthropology, linguistics, biology, ecology, political science, and economics.

Linguistically, Mongolian is one of the best documented languages of the Central Eurasian Steppe. The language has many unusual and fascinating linguistic features, whose development can be studied over a period of more than eight centuries.

In 2011, Mongolia celebrated 100 years of independence. These 100 years, full of tragedy and triumph, make Mongolia important for studies of grasslands ecology, economic development, collectivization and privatization of herding, and changes from a small-scale traditional society to a state socialist and then a free market society. Mongolian has been the country’s language of government, administration, and culture for centuries and in all of these fields, valuable research by native scholars has only been published in Mongolian.

Since the 1990s, Mongolia has been transitioning to a market economy. With its extensive land and mineral deposits, Mongolia attracts foreign investments and businesses. Mongolian economy has been proclaimed to be the next Asian Tiger (i.e. it is predicted to be the fastest growing economy in the region). As business partnerships with Mongolia and the United States grow, this creates a demand for educated Americans who are fluent in Mongolian.

Learning Mongolian can be a lot of work, but it’s fun! Mongolian has a phonetic alphabet, a consistent word order and grammar, and no pesky grammatical gender or noun-adjective agreement to trip you up. Best of all, Mongolia is one of the most opening and welcoming countries of Central and Inner Asia. With its thriving club scene, folk and classical music, and rich traditions of painting, Mongolia’s culture is a unique blend of nomadic and modern. 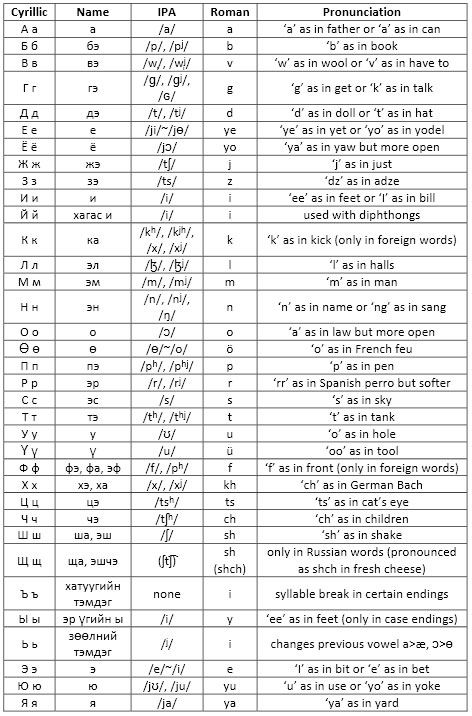 The Mongols (ethnic Mongolian speakers) are descendants of the people unified by the great Inner Asian conqueror Genghis Khan (spelled Chinggis in Mongolian) before his death in 1227. Today Mongols live in Mongolia, a country in East and Central Asia that borders Russia to the north and China to the east, south, and west. A large population of Mongols also lives in the Inner Mongolia Autonomous Region of the People’s Republic of China, as well as in Xinjiang, the Tibetan plateau, and parts of Russia.

Mongolian refers to a number of closely related languages and dialects. Mongolian, the official language of the independent nation of Mongolia, is properly called Khalkha Mongolian, after the four Khalkha provinces that were carved out of this region in the 17th century. Closely related dialects of Mongolian are spoken in the Inner Mongolian Autonomous Region of China, and more distantly related forms of Mongolian are spoken by the Buriats of Siberia, the Kalmyks of European Russia, and Oirats of Xinjiang and Tibet. Despite their linguistic differences, speakers of all these forms of Mongolian view themselves as people of one ethnicity and culture, a view encouraged by their common use of traditional Mongolian script until the breakup of the Mongolian cultural world in the 20th century. In addition, a number of smaller Mongolic languages are spoken in southern and western China and in Afghanistan by descendants of Mongol soldiers stationed there during the Mongol Empire. All varieties of Mongolian share a number of important characteristics.