When I decided I was going to use my summer to start learning Kazakh, it seemed like the perfect excuse to go back to Kazakhstan. Having previously spent time in Almaty and Astana, I wanted to try somewhere new. When our Kazakh FLTA suggested a language school in her home town of Karaganda, I went for it!

Exploring the leafy maze of backstreets and backyards of the city was not entirely dissimilar to the daily experience of stumbling through the new and unfamiliar sounds and endings of the Kazakh language: lots of surprises and easy to get lost (thank goodness for teachers and maps). Despite the fact that several people had informed me that no one speaks Kazakh in Karaganda, I heard plenty of Kazakh being spoken on the street and was even able to put my very basic vocabulary to use at my local fruit and vegetable market.

I think my favorite discovery in Karaganda was the story of Appak Baizhanov, the young shepherd boy who in the early 19th century supposedly became the first to discover coal in the region. Looking after his sheep one day (so the story goes) he came across curious black stones which, when tossed carelessly onto the fire, began to burn. The shepherd boy took his find back to the head of his village, and coalmining in Kazakhstan was born. A visit to the Mine Museum at the mining college in Maikuduk (incidentally, boxer Gennady Golovkin’s hometown!) provided a fascinating glimpse into this underground world on which Karaganda was built. It is hard to forget as you explore its streets and alleys that much of the actual building was carried out using forced labor—a darker side of the city’s history that can be uncovered at the excellent Karlag Musuem, about an hour’s drive from Karaganda.

Despite all the distractions (and a fair bit of Russian practice too), when I got back to Bloomington, I somehow managed to pass the placement test for intermediate Kazakh. So the adventure paid off! 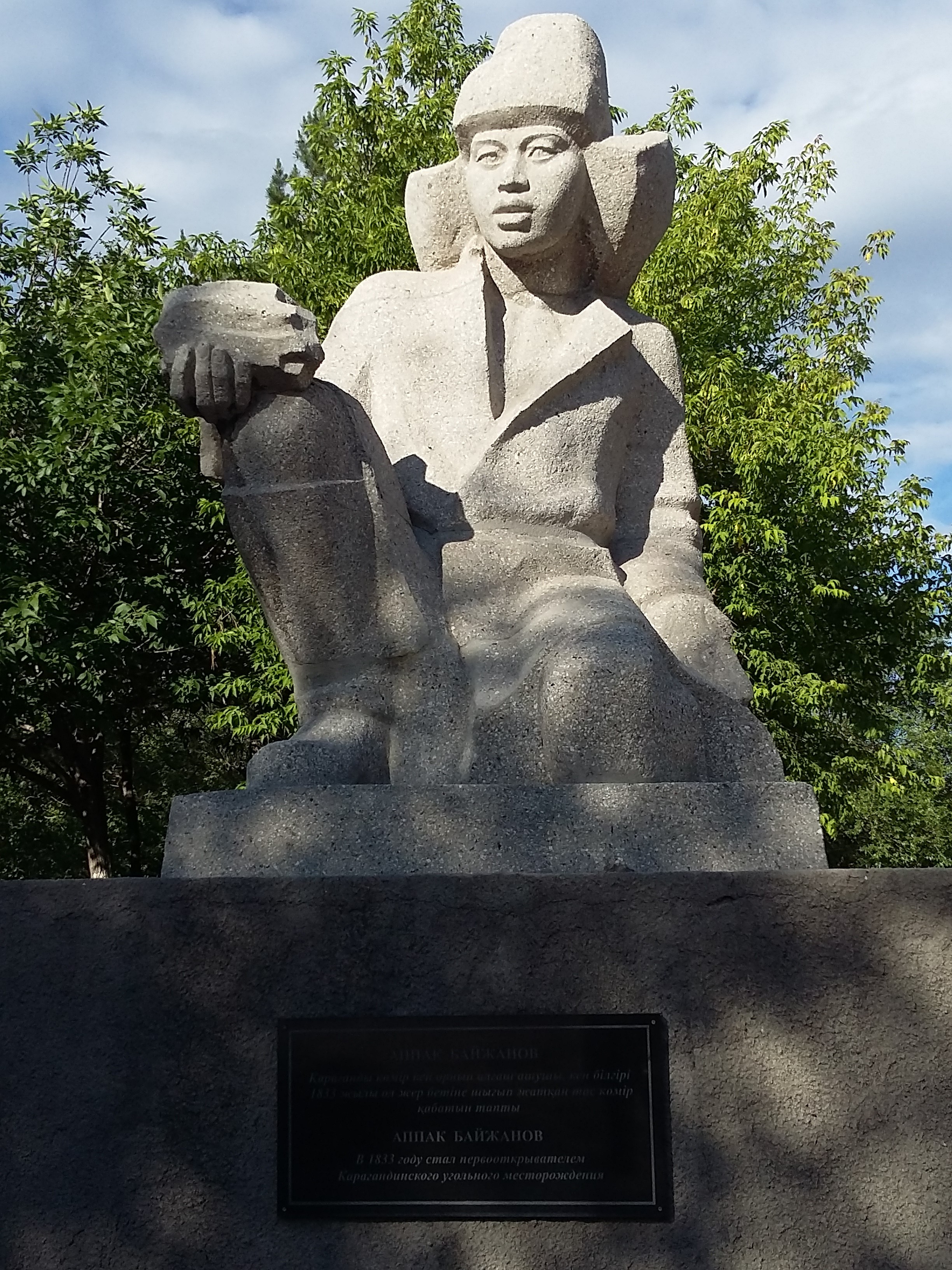 I recently had the opportunity to study Russian at the Summer Language Workshop (now known as the Language Workshop—ed.) at Indiana University. My interests include the history of Tajikistan and Uzbekistan in the early 20th century, and I had already been studying Persian to further pursue this. However, last year it became ever more apparent that I was severely handicapped in studying Central Asia due to my lack of Russian language skills. This prompted me to apply to study Russian over the summer. At first I was somewhat apprehensive about spending my summer in Bloomington, but the Russian language program proved to be a more than worthwhile experience.

Studying Russian at the Summer Language Workshop was challenging but also rewarding. The program was intensive and moved quickly. We were always given the opportunity to utilize our new language skills, which helped us retain new Russian knowledge throughout the summer. I was lucky to work with three gifted instructors: Brett Donohoe, Megan Luttrell and Ani Abrahamyan. They were wonderful teachers, and each had their own areas of interests and strengths in regards to teaching Russian. Brett is extremely knowledgeable about etymology and the origins of grammar concepts in the Russian language which he was enthusiastic about sharing with the class. Megan has created several Russian language learning games which we enjoyed playing in her classes. She also brought her love of music into our lessons and we were able to perform a Russian song for our language exposition during the summer. Ani was an extremely helpful instructor and was often able to explain new or difficult grammatical concepts to us clearly through her well-constructed presentations and examples. She also taught us a Russian dance which we performed, along with our song, at our language exposition. All three instructors were also readily available in regards to helping us with Russian outside of the classroom. They were welcoming and easy to visit with as I stumbled through Russian with them whenever we met for conversation practice throughout the summer.

I believe the summer language program left me more than adequately prepared to continue studying Russian in the fall. I have already found Russian useful in my research and am glad I took the time to participate in IU’s Language Workshop.

This past summer I was lucky enough to be a participant in the Foreign Service Summer Internship program, placing me in Tashkent, Uzbekistan for 3 months while I worked at the U.S. Embassy in the Public Affairs section. In that time, I worked closely with the local population, teaching an SAT prep course, hosting discussion clubs, and traveling across the country with speakers to talk about collaboration between American and Uzbekistani Universities. Working with the State Department also gave me a unique view on the United States’ investment in Uzbekistan, or better to say, growing investment. With a new president, I was able to witness firsthand the changes in the political climate between the United States and Uzbekistan and our growing friendship. I was also lucky enough to have my work take me across Uzbekistan where I was able to see the historic cities of Samarqand, Bukhara, and Khiva, and even convinced a driver to take me to the border of Turkmenistan. I was able to make incredibly meaningful connections with many locals, and after eating plov for the tenth time, I really began to feel like a local. And no matter how hot it got (151F), plov was served, as it is the ancient Uzbek belief that between the heat and the oil from the plov, all of the sweating helps you lose weight. I contend that this is not true. 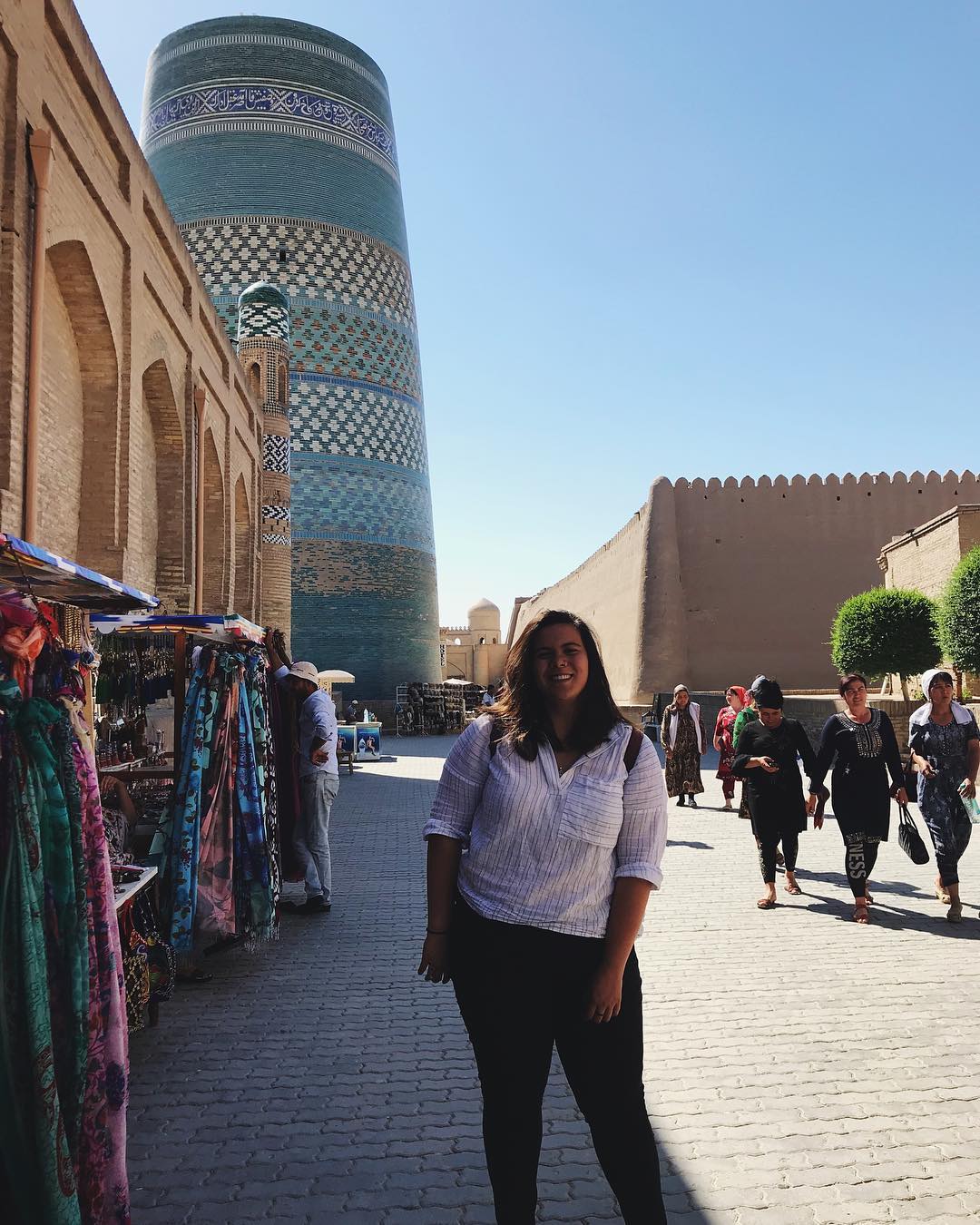 Abby in front of the Kalta Minor Minaret in Khiva

This summer I studied Turkish language and culture at the Indiana University Summer Language Workshop. Although the workshop was an intense program for which I feared I was ill prepared, I managed to come out of it successfully. During the eight-week workshop, I not only learned a lot of Turkish and a great deal about Turkish culture, but also grew as a person and formed lifetime connections with some incredible people.

A surprising number of Turks are resident in Bloomington, Indiana, and many of them took part in events organized by the workshop. For instance, musician Maksut Kesici came and sang folk songs with us. We also ate lunch at Sofra, a local Turkish café, and chatted with a Turkish family while having breakfast in their home. We learned the Turkish art of paper marbling, known as Ebru, and had our fortunes told through coffee. Turkish movie nights happened once every two weeks or so, the highlight of which was Kedi, a wonderful documentary about the lives of cats in İstanbul and their unique relationship with the people who live there.

Although I came to the workshop with neither much linguistic nor cultural understanding, I left it speaking and understanding so much more, all thanks to the opportunity to practice with and learn from so many amazing people. It was a great experience!