In late November, as the Fall Semester was beginning to wind down, students, professors, and members of the general public gathered for a presentation organized in collaboration between the IAUNRC and the IU Baltic and Finnish Studies Association. Elisa Repo, a doctoral researcher at the University of Turku and a visiting lecturer at the University of California Berkeley and Beijing Foreign Studies University, delivered a presentation about her own research and field work on the relationship between curriculum, pedagogy, and language for multilingual schools in Finland. This talk was titled “Towards Language-aware School: Perspectives on Supporting Linguistic Diversity in Finnish Schools.” Her fieldwork consists of interviews, data collection, and curriculum analysis for teachers in Finnish schools across different languages, including Finnish, English, and other languages natively spoken by international students and children of immigrant families. 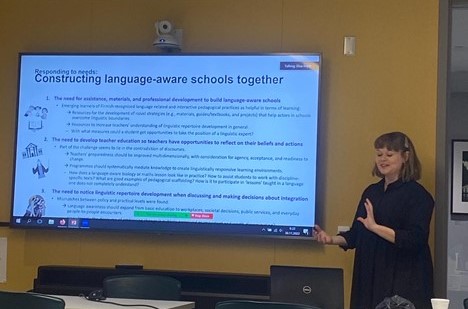 In her presentation, Elisa expounded the connections between several factors that mutually affect teachers and students in the classroom. Elisa described these connections as “agency,” “acceptance,” and “change.” These categories function as barometers of a given institution’s ability to address issues of globalization and multilingualism pedagogically, culturally, and linguistically in the Finnish education system, from the most localized classroom to higher organizational levels. Elisa’s research shows that, in the last six years of fieldwork, there is a clear dichotomy in teacher’s indicators for all three of these categories. Some teachers believe that they have the power and agency to take more initiative in adding more multilingual and multicultural content, while others believe that it is not of their concern. The category of “acceptance” denotes a teacher’s attitude towards perceived cultural and linguistic differences that affect a student’s ability to engage with material in a given language set. Some teachers remarked that certain differences between groups are immutable, while teachers in multilingual schools remarked that differences can be overcome with the right curriculum designs and goals. “Change,” accordingly, denotes a teacher’s attitude towards the idea that they are directly responsible for the possibility of impacting positive change through attention to the language-curriculum relationship in the classroom. 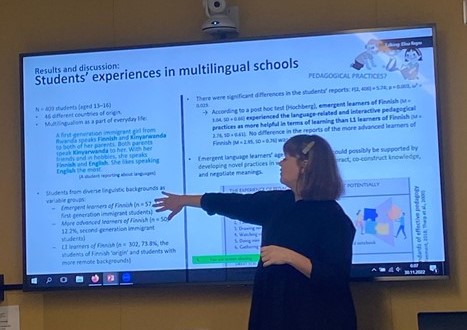 Elisa’s research analyzes significant discrepancies between stated and implemented policy, specifically issues of accessibility, inclusion, and equity for children of migrants and multilingual families. The presentation concluded with a lively Q&A session and discussion of the state of multilingual education policy in the Baltic region. The IAUNRC thanks Elisa and the IU Baltic and Finnish Studies Association for their collaboration in organizing this talk.