Sinophobic Sentiments: Uyghur Emigres in the Years of the Sino-Soviet Rift

Gulnisa Nazarova is the John D. Soper Senior Lecturer of Uyghur Language in the Department of Central Eurasian Studies at Indiana University. Her ongoing research explores the experiences of some of the thousands of Uyghurs who emigrated from Xinjiang in the People’s Republic of China to Soviet Central Asia during the latter half of the Soviet period. This research is based on oral interviews conducted in Kazakhstan, Kyrgyzstan, and Uzbekistan between 2016 and 2019. Following on from an article by Dr. Nazarova published by the IAUNRC in 2018, this article gives an overview of a paper co-authored with Dr. Gardner Bovingdon, Associate Professor of Central Eurasian Studies at IU, and looks at the ways in which connections to a Uyghur homeland manifested during the later years of the Sino-Soviet rift between the 1960s and 1980s.

The lowest point in Sino-Soviet relations began in the late 1960s and continued into the 1980s. Many Uyghurs who migrated to the Soviet Union during this politically charged period recall an atmosphere of extreme Sinophobia in the USSR, which coincided with both their own longings for an independent homeland and a plan to achieve it.

In thinking about this period, I recall some memories from my own childhood and adolescence in the Soviet Union. At school throughout the 1970s we would pray that Brezhnev would not die because there was the fear that China might attack the Soviet Union. I also remember singing comedic street songs with other students in Russia about hunweibins [from Chinese hongweibing – red guards] and Chinese regiments during my life as a college student in the 1980s. These songs were drinking songs (note the puns with “small shots” in the song below) whose lyrics had been modified, but we sang them because they were funny to us. Lyrics (translated from Russian by the author) included the following:

One hundred Chinese regiments approaching me,

Well, let them draw near, my machine gun is ready;

I pull the trigger, and all the Chinese will be dead.

A Hunweibin is coming at me from the bushes;

Well, let him come, I have a carbine.

I pull the trigger [and the bullet will go] into the hunweibin’s ribs.

The people I interviewed in Central Asia shared their thoughts, supplementing their memories with information from television and newspaper articles. It is natural that people rethink the past under the influence of the present. However, we suggest that even if they have rethought the past, there is historical value to their reminiscences because they tell us about the spirit, if not the exact historical details, of events.

Several general patterns of common experiences and sentiments emerged from the interviews. For example, all the interviewees mentioned the years of good relations between the Soviet Union and China in the early 50s when both the Soviet Union and China had closely aligned political interests and similar ideological views. At the time, the whole world was concerned about the “red-yellow threat to the free world.” Nevertheless, later reports indicate that Stalin compared Mao with a radish—red on the outside, white on the inside. (The Worker, Vol. 9, No. 14, Sept. 1976)

In February 1950, Mao and Stalin signed an agreement on friendship, union, and mutual assistance. However, after Khrushchev came to power following Stalin’s death, and after Khrushchev and Mao hurled criticisms at each other for “deviations” and “revisionism”, the relations between the Soviet Union and China deteriorated. By the mid-60s, China perceived the Soviet Union as an enemy. These years were fateful for Uyghurs as well. Thousands and thousands of Uyghurs fled the Xinjiang region, along with Kazakhs, Kyrgyz, and Dungans.

The 1962 exodus of over 60,000 from Xinjiang is fairly well known, but the emigration actually began earlier. The Uyghur migration from Xinjiang to Soviet Central Asia started in the 1950s when the Soviets distributed Soviet passports to people in China who had crossed the border from Central Asia into Xinjiang during the collectivization movement of the 1920s and 1930s. Along with these “Soviets,” who could be said to be returning home, local people born in Xinjiang obtained Soviet passports as a kind of insurance policy in case they should decide to move to the Soviet Union in the future. Providing passports to both groups was a clever and conscious strategy by the Soviets likely intended to meet several goals: first, the promotion of large-scale immigration would help replenish the Central Asian labor pool depleted by the heavy losses in World War II; second, it would promote the gathering in Soviet Central Asia of a group of people alienated from Beijing and grateful to Moscow for taking them in.

Oral testimony attests to the emotional and physical resonance of these memories. As one interviewee observes, “the Soviets were really concerned about the possibility of a Chinese invasion and a World War III.” However, the fear of impending violence was not necessarily experienced as a negative or traumatic phenomenon. The Soviet vilification of China and resulting preparations for open conflict fit well with many Uyghurs’ feelings of attachment to and longing for their homeland. As one interviewee noted, “We wanted this war; we hoped this would bring us independence.” Later, this same interviewee claimed about the Soviets that “In 1970 they prepared us for war with China. They trained us to jump with parachutes [and] use machine guns.” The trainers made the purpose and target of the exercises clear: “They [the Soviets] called it военные сборы: military training. They said ‘you know your land well; you will go there to fight.’”

Uyghurs believed that the Soviets would help them gain independence, despite knowing that the Soviets had repeatedly deceived and betrayed them in the past. As S.G. Luzyanin (1999, author’s translation) wrote:

“Even though the Soviets supported the Muslim rebels in Xinjiang, they had no intention of assisting the Uyghurs to gain their independence (from Chinese occupation). The Soviet leaders in Moscow knew that an independent Uyghur (Muslim majority) state would not only be anti-Chinese but would also pose a threat to the Soviet Union since it would destabilize the (Central Asian) region. The USSR had three chances to help the Uyghurs to establish their own state with minimal effort: during the 1925-1927 Chinese Revolution, in the midst of the 1931-1933 Muslim uprising in Xinjiang, and during the years 1944-1945, when the East Turkestan Republic existed. However, no [such] action was taken by the Soviets. This confirms that Moscow’s foreign strategy at that time aimed to protect its own national interests and maintain strong ties with Communist China.”

Another Dungan man said he heard about the training of Soviet Central Asian citizens who spoke Chinese to act as spies and infiltrate China. This man’s uncle had crossed the border in the late 1960s as an agitator and informer whose tasks were twofold: first, to talk to the local people in Xinjiang and tell them that the Soviets were not interested in war with China, and second, upon his return, to inform the Soviets about the situation there and about the people’s feelings towards the Soviets. This same man also said that in the border zones they - meaning Uyghurs - were being trained as partisans. 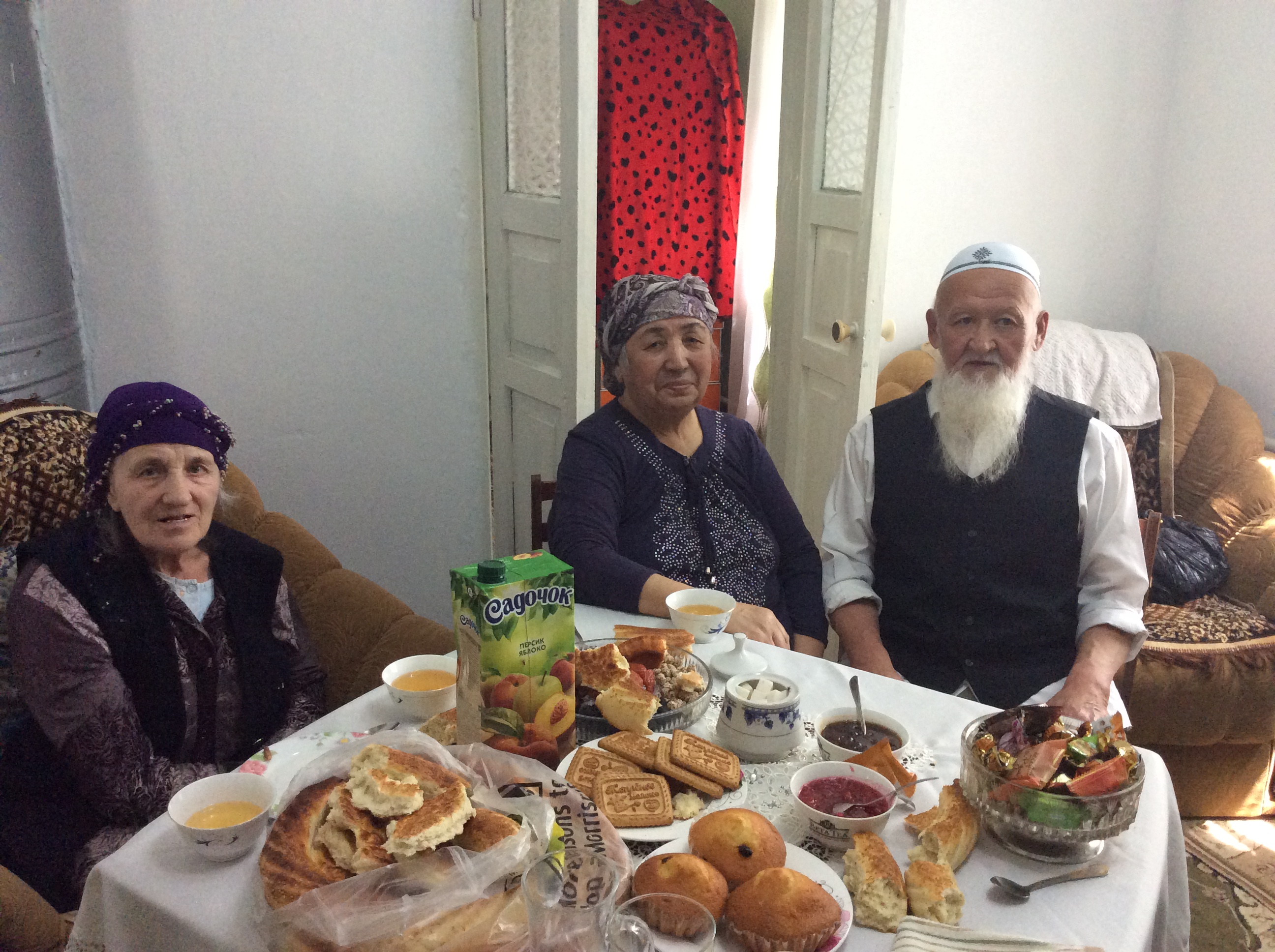 Another account came from a man who was sent to Ghulja by the Soviets in 1970 and was taken into custody by the Chinese authorities. He spent 10 years in prison, and his family did not know his whereabouts, or even whether he was alive. They only knew that he was on a “secret mission.” When I asked the man what his mission had been, he would not tell me; he said that he could not tell me even 49 years later it because it was a “military secret.” However, my own uncle (my father’s older brother) was sent to Ghulja in the same period. He died in the early 2000s, but his brother-in-law knew about his mission. My uncle would share all his adventures with his brother-in-law, being unable to keep them bottled up inside. As the brother-in-law narrated, “in the 70s, there were underground Soviet organizations in the Ili region. Your uncle’s mission was delivering Chinese money to [those organizations].” He said: “I would not tell you this if [your uncle] were still alive, because it was a ‘state secret.’”

My uncle had told his brother-in-law that the Soviets would help them cross the border, and they needed go to a specific address, where someone would meet them and receive the money. Then they needed to go back to the border. The man mentioned above who was caught by the Chinese and spent 10 years in prison did not go back to border after he delivered the money. Instead, he went to visit his mother, who lived in Ghulja, and was caught. He did not say anything about his mission, just that he wanted to see his mother. After 10 years they let him go back to the Soviet Union. After he returned, the Soviet government took good care of him. He and his family were provided with a nice house and money.

My uncle’s brother-in law continued: “In 1993 one of our relatives came to visit us from Ghulja. He said that the Uyghurs in the Ili region had been waiting all along for their relatives who left the homeland in the 1950s and 1960s. They thought that we all would come back, because all the Chinese people, who occupied the Uyghur houses after the diaspora had run away from Suydun, Qorghas, Ghulja and other places. They were afraid that the Soviet Army would come with the Uyghurs and kill all the Chinese. Many houses became empty.”

Among the people I interviewed were some Uyghur women as well. However, they said that they did not remember anything about fears or hopes about a possible war. Perhaps this is because Uyghur women had a lot of responsibilities at home and did not have time—or did not want—to discuss political issues. They were dealing with their own challenges related to the home, kids, and relatives, while Uyghur men were discussing political problems. Regarding this, one man said: “It is like in an old anecdote: Someone asked a man, who is the most important person in your family, you or your wife? The man replied: Of course me. I think about all the big problems; will China attack the Soviet Union? What should we do to prevent this attack…My wife is just dealing with small things such as what the kids will eat today, tomorrow; what will they wear, and so on.”

Many emigres shared and expressed a close sense of connection to the Uyghur homeland across the Sino-Soviet border. As those who remember these years grow old and the shadow of the Soviet Union fades, emigres are more willing to discuss experiences and perspectives that have not been well documented, and might disappear with them. Oral history represents a critical method for studying the Uyghur diaspora in Central Asia, as well as its history. It is important that we speak to people who lived through these experiences before they leave us forever. 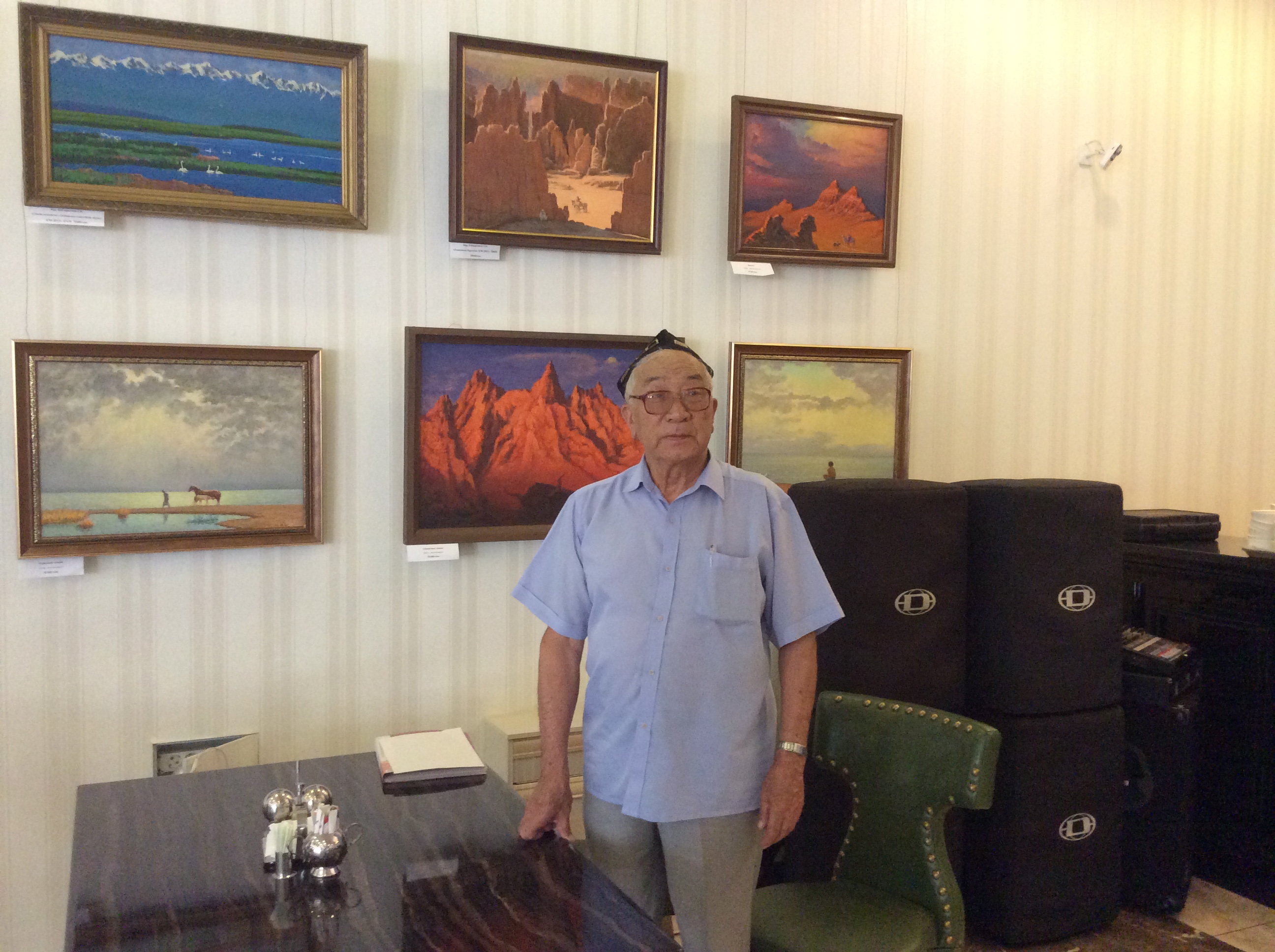 Artist Sabitjan Babadjanov, who described his move to the Soviet Union in his diary. Pictured here amongst his works. Photo Credit: Gulnisa Nazarova