On January 31, 2020, the Inner Asian and Uralic National Resource Center held a symposium highlighting a number of different approaches to understanding Central Asia. Despite being held on a Friday afternoon, the event attracted an audience of almost fifty students and faculty, filling the classroom in the Hamilton Lugar School of Global and International Studies where the event was held. 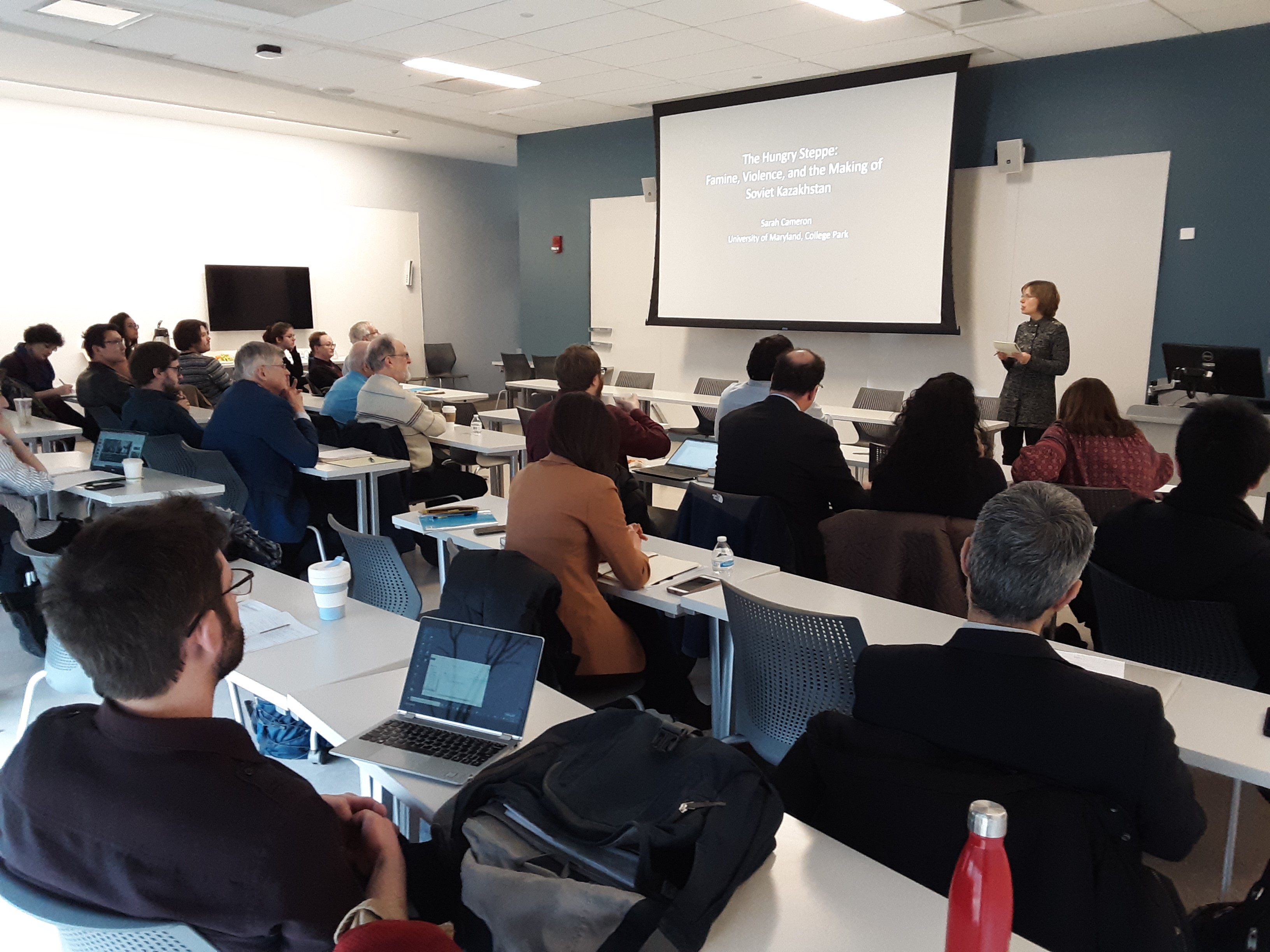 Dr. Sarah Cameron kicked off proceedings with a talk based on her recently published book, The Hungry Steppe: Famine, Violence, and the Making of Soviet Kazakhstan, in which she explores the impact of collectivization on Kazakh nomadic herders and its role in the shaping of Kazakhstan’s national identity. Engaging closely with environmental themes, Dr. Cameron addressed the question of how we might understand the concept of nation-making in the context of violence during the Stalinist era.

Dr. Scott Radnitz provided an overview and analysis of information gleaned from focus groups conducted in Georgia and Kazakhstan to explore the persistence and significance of conspiracy theories. In a talk entitled “Cynicism and Sense-Making: The Logic of Conspiracy Thinking in Kazakhstan and Georgia,” Dr. Radnitz theorized on why conspiracy theories take the form they do, and what they can tell us about people’s understanding of the world.

Zukhra Kasimova’s presentation encouraged the audience to reexamine the hybridity of Soviet identities, using the cultural and linguistic integration of “European” children adopted by Uzbek families during World War II as an illustration of this. Her research on this topic contributes to a broader PhD dissertation looking at what she interprets as “hybrid modernity” in the making of Soviet Uzbekistan, emphasizing the heterogeneity of Central Asian space and the multivalent processes of Soviet identity formation.

Finally, Dr. Elizabeth Brite charted the origins and domestication of the apple in Central Asia as revealed through archeological and DNA analysis. Her research emphasizes the importance of environmental factors and processes drawn out over long periods which prompt us to reevaluate the emphasis so often placed on Silk Road exchange. 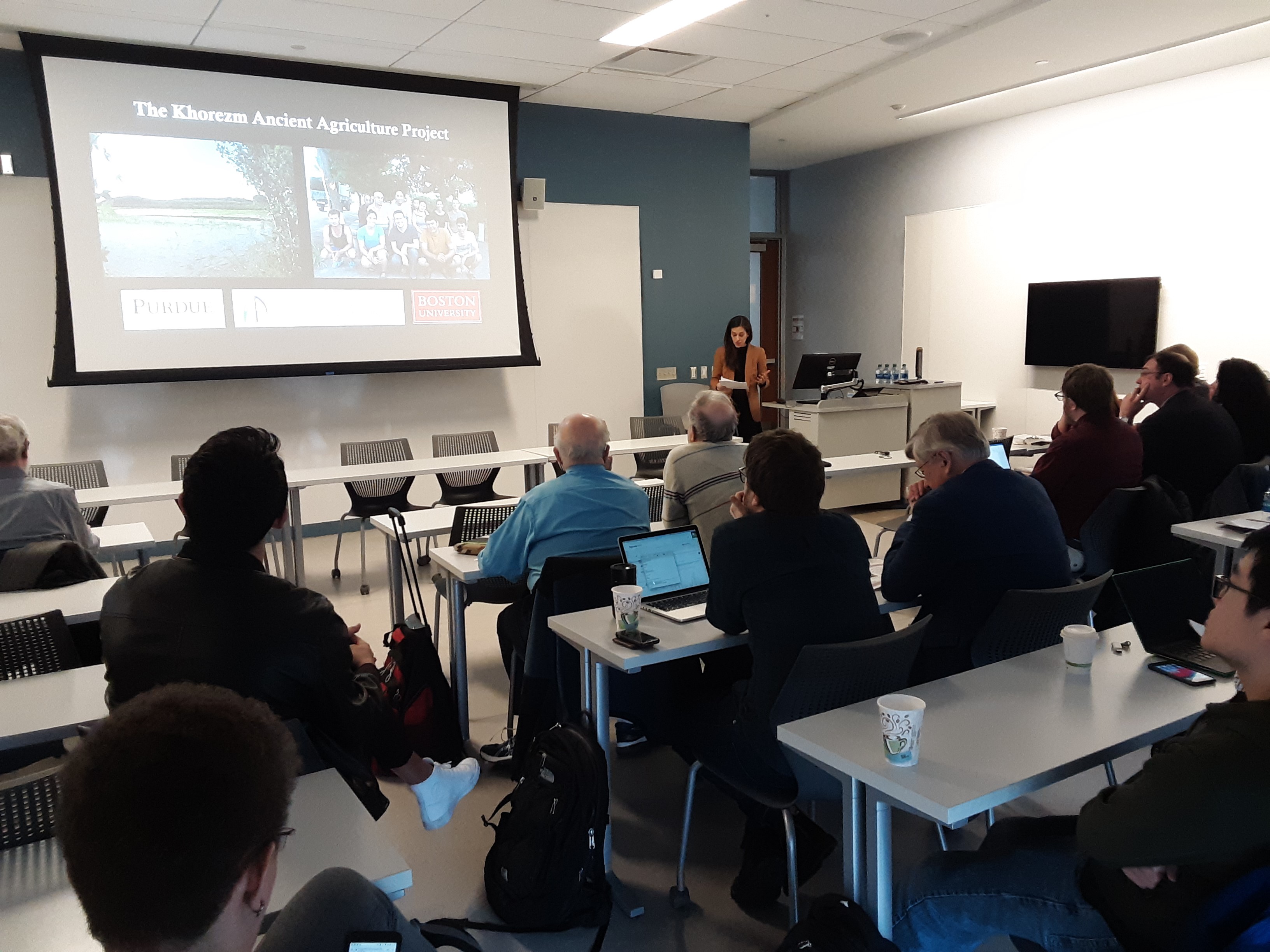 Dr. Elizabeth Brite talks about her work in Central Asia

In addition to the main event, the IAUNRC hosted a networking event over breakfast provided by the Bloomington Bagel Company at which students had the opportunity to meet the guest speakers, discuss mutual research interests, and ask any burning questions. Following the symposium, participants were invited to join a number of IU faculty at Afghan restaurant Samira for a concluding dinner, which also served as a platform for the discussion of research and ideas pertaining to the study of Central Asia.

The IAUNRC would like to thank all the speakers, the discussant Dr. Kristoffer Rees, Dr. Marianne Kamp for her role in organizing the event, and the audience for making this symposium a success.

You can find recordings of all the symposium presentations here.