"I blame karma": Stacey Van Vleet on Her Journey through Tibetan Studies

In August 2019, the Department of Central Eurasian Studies at Indiana University welcomed a new Assistant Professor of Tibetan Studies, Dr. Stacey Van Vleet, who joined IU from the University of California at Berkeley. The Inner Asian and Uralic National Resource Center spoke to Professor Van Vleet about what first got her interested in Tibet, her experiences in the field, her current research, and her thoughts on Tibetan Studies at IU.

Thank you so much for agreeing to give this interview. Maybe you could start by telling us a bit about yourself and where you come from. What inspired you to get into Tibetan Studies?

I’m often asked how I came to be interested in Tibet, and generally only half-joking, I blame karma. It’s a long story. I grew up in St. Petersburg, Florida, and when I was quite young, I travelled with my family to China – my father is a professor of Marine Chemistry and he took us along when he was invited to teach there. I was small and impressionable and the trip was memorable in a number of ways – from reading “strange stories” by Pu Songling to drinking milky tea outside of Hohhot (my parents couldn’t understand why I loved this so much). But perhaps my strongest impression came a few months after we returned, watching the television broadcast of the student protests and tanks rolling through Tiananmen Square, where we had just visited. This was the first time I remember thinking about political participation and the immense power of states and institutions to shape our lives.

Years later, when I was an undergraduate at Duke University, my major was Public Policy Studies, and I travelled to Nepal for a study abroad program focused on environmental and development issues. This program also provided my first introduction to the Tibetan Buddhist world, and at the end I conducted a one-month Independent Study fieldwork project at a Sherpa Buddhist nunnery known as Bigu Gompa, in the Dolakha district bordering Tibet. My research was on women’s access to leadership roles in the community, both for the nuns and for laywomen in relation to an international development project being implemented at that time. It would be a few more years before I thought about pursuing studies related to Tibet, but that research certainly planted seeds of interest.

Afterwards, my main goal was to continue working with communities to organize around issues of social justice. I started working with the Duke-UNC Center for Documentary Studies on projects that integrated the arts, especially photography and filmmaking, with activism in schools and non-profits. I worked with students from the local Tibetan community and with Student Action with Farmworkers, and after graduation I took an Americorps-funded position in Colorado at a place called Project YES! (Youth Envisioning Social change – it was named by middle schoolers so the acronym was creative). As a next step I planned to pursue an MA in Anthropology at the University of Colorado, Boulder, with a well-known team of documentary filmmakers. But when I arrived, they had transferred to another school, so I sought other mentors and my interests started evolving. This is when I found common ground with an exciting and at that time new professor there, Carole McGranahan, an anthropologist of Tibet. I also worked with a linguistic anthropologist, Kira Hall, and her work regarding the fluid construction of narrative identities dovetailed in an interesting way – at least in my rudimentary understanding at that point – with Buddhist ideas about no-self. This was an interesting set of questions for me because of the implications for how individuals coalesce as communities – or don’t – around social action. So I became much more interested in the great intellectual traditions of Tibet, as well as in how Tibetan culture was changing and how young people in particular were seeking to participate and create new dimensions of the public sphere. For a long time there had been a narrative of cultural decline inside Tibet, but it was increasingly clear that despite – or perhaps because of – being greatly circumscribed, plenty of cultural production inside Tibet continued to be creative and vibrant.

This was also a time (in the early 2000s) when it was more possible than ever before – or since 2008 – to spend time in Tibet. So I planned an MA thesis project that would bring me to Lhasa to research youth culture and especially rock music. There were two Tibetan rock bands at the time, Namchak (Gnam lcags; also called Vajara) and Zimig Gupa (Gzi mig dgu pa), that had gained a substantial following locally, on the underground music scene in China, and also among Tibetans internationally. I applied as a student to Tibet University in Lhasa and spent two years there, researching music, working as an English teacher at Braille Without Borders, but above all learning to speak, read, and write Tibetan. The immersion in language, along with this extended period of time to witness and talk to people about what life was like currently inside of Tibet, was what finally led me to make Tibet the focus of my future work. In many ways it felt like a responsibility, since so many people had entrusted me with their stories, and there still wasn’t a lot of opportunity for those stories to be heard outside of Tibet.

Where were you based before coming to IU, and what attracted you to the position here?

After returning from the two years in Lhasa, which was between 2004-2006, I earned my PhD in History and East Asian Studies in conjunction with the Modern Tibetan Studies program at Columbia University. It was a new and exciting program; I was one of the first two graduate students. We worked with Gray Tuttle who is really a fantastic mentor. And I also have to mention another mentor who has been instrumental in my growth as a scholar, Tashi Tsering from the Amnye Machen Institute. During my first year in New York City I worked at the Rubin Museum of Tibetan and Himalayan Art, and later with the Tibetan Buddhist Research Center, which was based there at the time and headed by another incomparably generous mentor to many, Gene Smith. And I kept travelling to Tibet, but because the political situation had changed there again, it became difficult to go to Lhasa and I spent more time in Amdo and Kham. I worked especially with the Arura Tibetan Medical Research Center in Xining, the capital of Qinghai province, on a translation project related to Desi Sanggyé Gyatso’s fantastic 17th century medical paintings. My research focus had shifted to medicine because when I was in Lhasa it was clearly one of the primary areas of traditional culture being promoted by both the state and monasteries, and it turned out that there was an interesting history to the field of medicine as a rich sphere of cultural, institutional, and economic exchange linking Tibet, Mongolia, and China before the emergence of new national borders in the 20th century.

After finishing my PhD, I moved to the University of California at Berkeley and spent four years there as a lecturer, teaching classes in both Tibetan and Chinese History. When the position in Tibetan Studies at Indiana University came up, it was my dream opportunity. Most of the teaching and research in Tibetan Studies takes place in the context of Religious Studies and to a lesser extent Anthropology departments, and in terms of area studies, is usually grouped with South Asia. But Indiana has long been renowned for teaching Tibetan history in the context of Central (and Inner) Asia, which emphasizes Tibet’s centrality within Asia and its relationships not just with India and South Asia but just as significantly with Mongolia, China, and the Islamic world. My own work has very much come to be about institutional and cultural networks that have historically linked Tibetan Buddhists across contemporary geographic and ethnic boundaries, and I am thrilled to be part of this department and feel very much at home.

It has been a very warm welcome! Bloomington is friendly and comfortable and at the same time has so much depth and so much happening – I especially love the IU Cinema and of course the Tibetan Mongolian Buddhist Cultural Center. 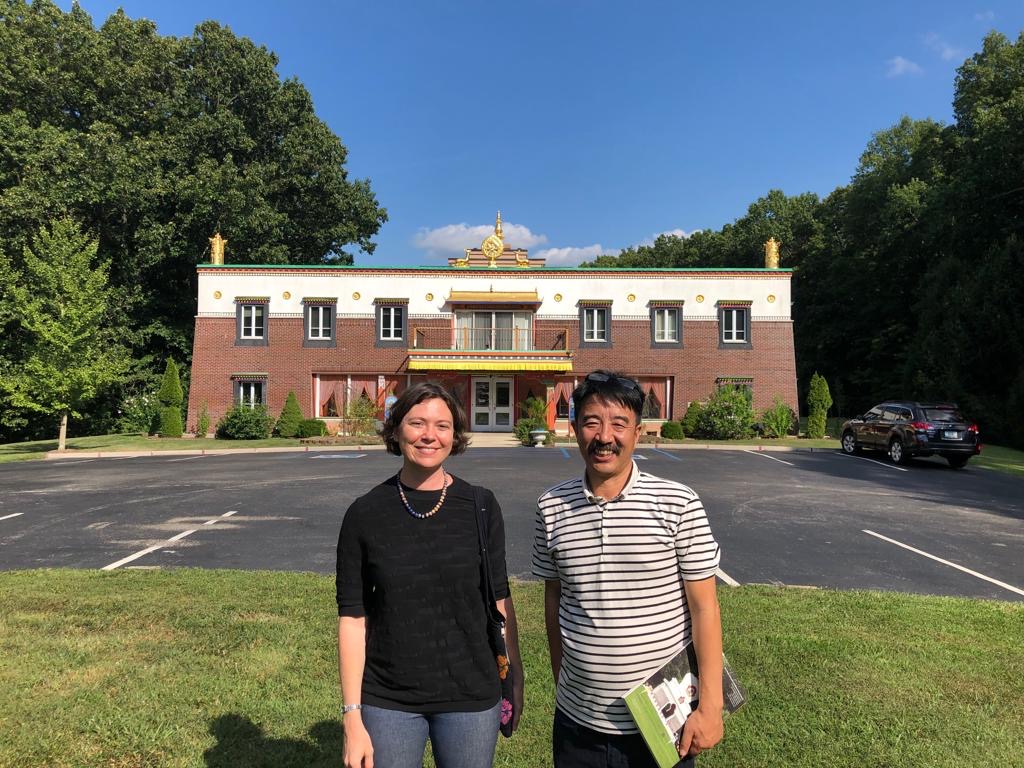 What classes are you teaching this year, and how are they going?

This semester I taught a seminar, Sino-Tibetan Relations, and a lecture course, The Civilization of Tibet. Both classes were well-enrolled, and it’s been a real joy to be able to dive deeply into these subjects with people who are genuinely interested and motivated. I’ve particularly enjoyed the range of backgrounds and interests that the students bring to the table – from international diplomacy and comparative minority politics to Buddhism, arts and literature.

What advice would you give to someone wanting to do research in this field?

Come to see me in my office hours!

What are your current research interests? Any forthcoming publications that we should be looking out for?

I am actually working right now on an article that is based on my Master’s thesis, discussing rock music as a critical form of social engagement in Lhasa in the early 2000s. Another piece that is now fairly close to publication is a chapter discussing the history and culture of manuscripts related to Tibetan medicine, and the significance of manuscripts in the production and cross-cultural circulation of worldly knowledge. This is for a book on Tibetan codicology edited by Matthew Kapstein.

And of course my main project currently is a book manuscript, tentatively titled Plagues, Precious Pills, and the Politics of Tibetan Learning in Qing China. The book is an institutional and cultural history of a vast network of monastic medical colleges linking Tibet, Mongolia, and China between the seventeenth and early twentieth centuries. I examine the curricula and specialties of these medical colleges, which encompassed everything from plague prevention and bonesetting techniques valued by the military to ritually-produced “precious pills” that promised power and longevity to the empire and its leaders. I also look at the role that monastic medical colleges played at both local and central levels of Qing imperial governance, and how the delegitimation of traditional knowledge institutions in the early twentieth century helped to give rise to fragmented projects of nationalism across the Tibetan Buddhist world.

What developments would you like to see in Tibetan Studies at IU—and in general?

Given the unique profile of the Central Eurasian Studies department, I’d like to see Indiana develop as a place to seriously examine Tibet’s centrality within Asia and relationships with other societies in Asia. At the same time, our program has great potential for encouraging cross-disciplinary research, both in the realm of politics and policy – given our affiliation with the School for Global and International Studies – as well as History, Religion, Anthropology, Folklore, Music, Comparative Literature, etc. We have a wealth of resources across campus to draw from, including multiple library and museum collections, as well as the Tibetan Mongolian Buddhist Cultural Center in Bloomington, and we should find ways to engage more with all of these. Together with Gedun Rabsal in CEUS, and the Tibetan Studies Students’ Association, we have also begun to invite more speakers and visiting scholars to campus, both from inside and outside of Tibet. The Sinor Research Institute for Inner Asian Studies affiliated with CEUS has been a great resource in this regard, and I’d like to see the SRIFIAS further develop as a hub for workshops, talks, and visiting researchers to make connections between Tibet and the wider sphere of Central Asia and beyond.